Hu Shin Kai is a “dojo”, a training place, for traditional Shotokan Karate.

To understand the traditional Shotokan Karate, it is important to understand its roots. Shotokan Karate is one of the four major styles of traditional Karate founded by the master Gichin Funakoshi (November 10, 1868 ~ April 26, 1957). It is arguably the most known and practiced style of karate. Master Funakoshi dedicated his entire life to the practice of karate, and his pupil respectfully began calling his karate “Shotokan” Karate. “Shoto” was his artist name, and “kan” translates to “home” in Japanese.

Hu Shin Kai (HSK) aims to provide authentic Japanese Karate from Japan.  As a country that Karate originated, Japan has incomparable history, people, and learning materials. HSK always roots itself to Japan and promotes learning by camps with Japanese instructors, instructors and members constantly visiting Japan to learn further, and learning from like-minded and like-experienced Karate-Ka from all over the world.

HSK members can train with different goals: Martial arts, competition, health, entertainment, etc… We consider the physical training as a basis but focus our attention to one’s personality, principles, and ethics, as our goal is to train to become a better person as a whole. 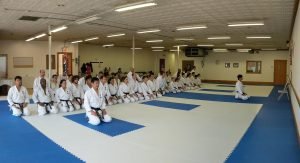 “Hu” means wind, representing our style that can be used in various ways similar to the nature of wind. It is also a reference to the location of the dojo, the ?Windy City.?

“Shin” means mind, demonstrating our dedication and emphasis on the mental aspect of Karate-Do.